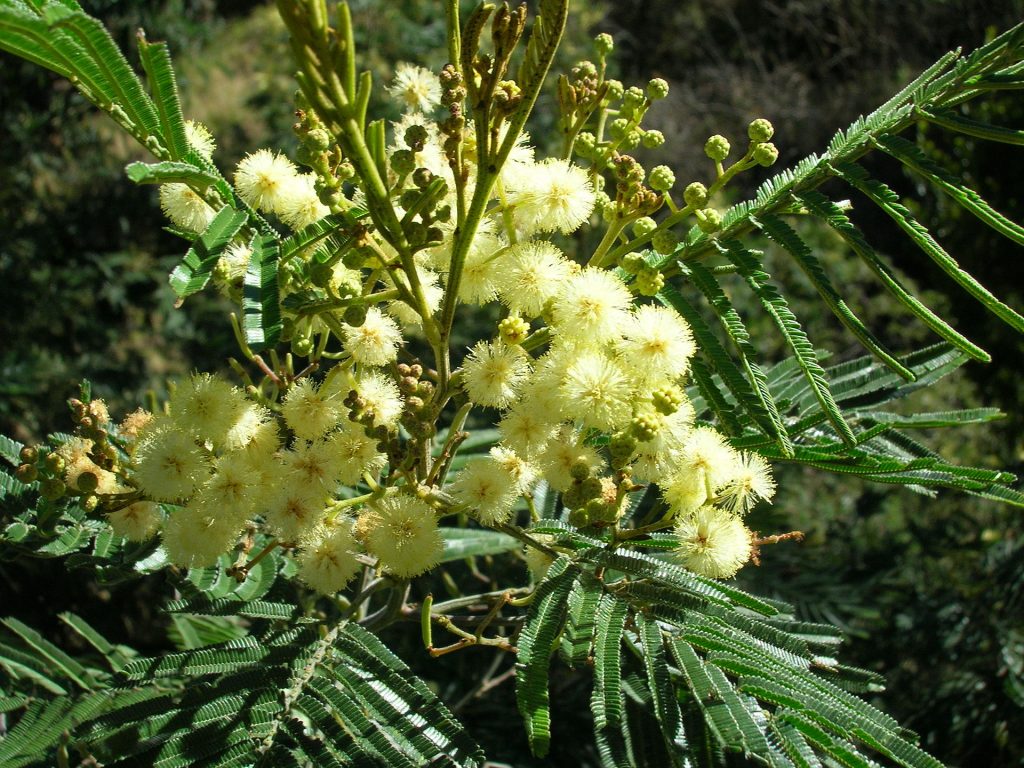 A. mearnsii plays an important role in the ecosystem in its native Australia. As a pioneer plant it quickly binds the erosion-prone soil following the bushfires that are common in its Australian habitats. Like other leguminous plants, it fixes the atmospheric nitrogen in the soil. Other woodland species can rapidly use these increased nitrogen levels provided by the nodules of bacteria present in their expansive root systems. Hence they play a critical part in the natural regeneration of Australian bushland after fires.

The cracks and crevices in the wattle’s bark are home for many insects and invertebrates. The rare Tasmanian hairstreak butterfly lays her eggs in these cracks, which hatch to produce caterpillar larva attended by ants (Iridomyrmex sp.) that feed off the sweet exudates from the larva.  A. mearnsii is used similarly as a larval host plant and food source by the imperial hairstreak, Jalmenus evagoras.

The tree is home to various grubs, such as wood moths, which provide a food source to the Australian black cockatoos, who strip the bark for access to these borers.

During winter insects, birds and marsupials are hosted by the black wattle with the aid of their supplies of nectar in their leaf axials. These creatures provide an important predatory role to deal with tree die back caused by scarab beetles and pasture pests.

Black wattles, along with gums, native box, native hop form the framework vegetation on so-called “hill-topping” sites. They are often isolated remnant pockets of native vegetation amongst a lower sea of exotic pasture. These “hill topping” sites are critical habitat for male butterflies to attract females for mating, which then lay their eggs under the wattle’s bark elsewhere but still within close proximity. It’s the only acceptable mating site in the area for these butterflies.

Ants harvest the seed, attracted by the fleshy, oil rich elaiosome (or seed stalk), which they bury and store in widely dispersed locations. These seeds are buried ready for germinating with the next soaking rains. However a “wattle seed-eating insect’ which enjoys liquid meals using its proboscis-like injector to pierce the testa and suck out the embryo often reduces the seeds viability.