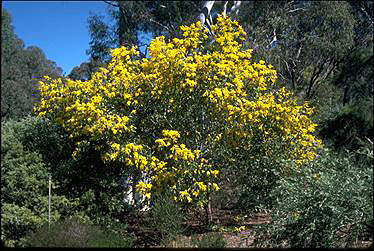 Acacia pycnantha occurs across much of Victoria and southeastern South Australia, including Eyre Peninsula and Kangaroo Island, with some extension into southern inland New South Wales, and at Mt Jerrabomba in the Australia Capital Territory. There is an putative natural occurrence near Broken Hill, in western New South Wales. It has become naturalised in many areas of southern Australia, particularly the southwest of Western Australia. This species is usually a shrub or small tree to 5 m tall but sometimes taller, often with white, pruinose bark on branches near the crown. It grows on a range of sites, from rocky ridge tops to low undulating terrain, and on variety soils including calcareous sands, clays and shallow, stony loams.

Acacia pycnantha is a fast growing, nitrogen fixing shrub or small tree, which can be grown on recharge sites and a wide range of shallow soils. This species was proclaimed as Australia’s official National Floral Emblem in 1988. It has become naturalised in number of areas outside its natural distribution in Australia (e.g., the south west of Western Australia).