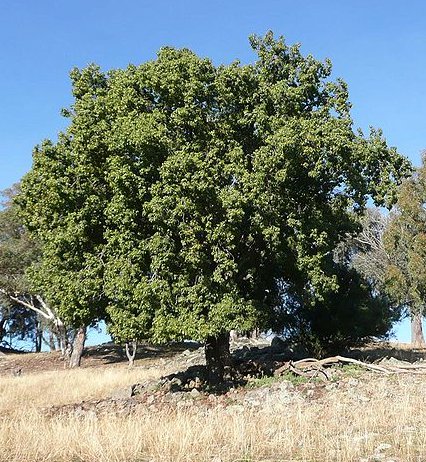 Brachychiton populneus, commonly known as the Kurrajong, is a small to medium-sized tree found naturally in Australia in a diversity of habitats from wetter coastal districts to semi-arid interiors of Victoria, New South Wales and Queensland. The extended trunk is a water storage device for survival in a warm dry climate. The bell-shaped flowers are variable in colour (pale to pink) while the leaves vary considerably in shape. The leaves are either simple and pointed, or may be 3 – 9 lobed. Saplings grow from a drought and fire resistant tap-rooted tuber.

The Kurrajong has multiple uses and was used by many Australian Aboriginal clans and tribes around Australia. The seeds located in a seed pod were often removed and cleaned of the fine hairs with in the seed pod and was often roasted. Water could be obtained from the tree roots by boring a hole in the trunk and squeezing the wood. There has also been records of the seedpods being turned into a children’s rattle or toy. The soft spongy wood was used for making shields, and the bark as a fibre. The leaves are also used as emergency fodder for drought-affected animal stock. There has also been records of European setters using the seeds as a coffee supplement by roasting and crushing the seeds.