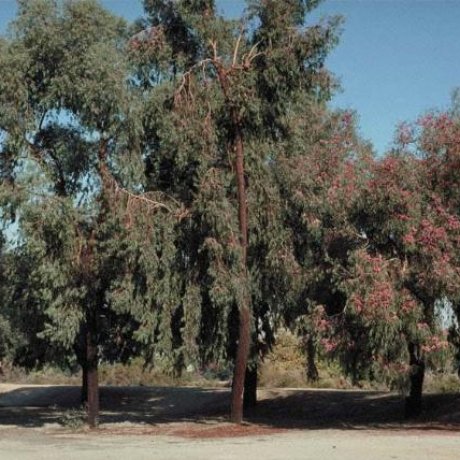 Eucalyptus sideroxylon extends from near Wangaratta in northern Victoria, north along the western slopes and western plains of New South Wales, with scattered occurrences into southeastern Queensland, as far as Carnarvon Range, Waaje, Wondai State Forest, Yarraman and Goombungee. Easterly occurrences in New South Wales include near Sydney and in the Hunter Valley. This species is woodland tree up to 25 m tall typically found on poor, shallow soils, including sands, gravels, ironstones and clays.

Eucalyptus sideroxylon is a hardy tree that is relatively drought and frost tolerant, with potential to be cultivated well beyond its natural range. It is likely to tolerate poor shallow soils, similar to those across its natural distribution, but is considered relatively slow growing. It was ranked as being only slightly salt tolerant so caution is warranted planting it on sites where salinity is a problem. Eucalyptus sideroxylon produces dense, durable wood that has been used for a range of heavy duty applications including bridges, building timber, heavy construction, beams, engineering structures and railway sleepers. Eucalyptus sideroxylon also has value as fuelwood, charcoal, fencing, posts, and for apiculture. It is regarded a one of the major honey producing species of New South Wales.