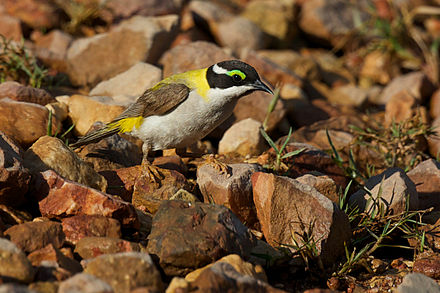 The Black-chinned Honeyeater is the largest of its genus, reaching 17 cm in length. The cap is black, with a white crescent around the nape, and there is a diagnostic black ‘chin’ beneath the bill and extending down the white throat (though this can be difficult to see in the field). There is a small crescent of blue skin above the eye. The back and wings are a dull olive-green and the tail is greyish-brown. The underparts are white, with a greyish-buff tint on the breast. The bill is short, black and slightly downcurved. The call is a ringing, bubbling trill, repeated several times. A combination of larger size, black chin, bright blue eye crescent and call distinguishes this from similar species, such as the White-naped (Melithreptus lunatus) and White-throated (M. lunatus) Honeyeaters.

The Black-chinned Honeyeater has two subspecies, with only the nominate (gularis) occurring in NSW. The other subspecies (laetior) was formerly considered a separate species (Golden-backed Honeyeater) and is found in northern Australia between central Queensland west to the Pilbara in Western Australia. The eastern subspecies extends south from central Queensland, through NSW, Victoria into south eastern South Australia, though it is very rare in the last state. In NSW it is widespread, with records from the tablelands and western slopes of the Great Dividing Range to the north-west and central-west plains and the Riverina. It is rarely recorded east of the Great Dividing Range, although regularly observed from the Richmond and Clarence River areas. It has also been recorded at a few scattered sites in the Hunter, Central Coast and Illawarra regions, though it is very rare in the latter.