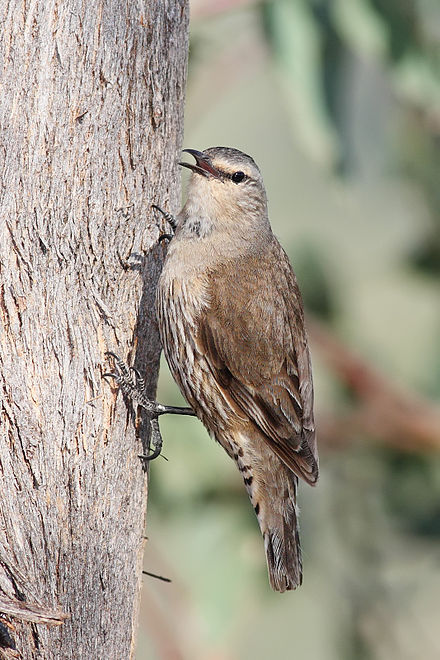 The Brown Treecreeper, Australia’s largest treecreeper, is a grey-brown bird with black streaking on the lower breast and belly and black bars on the undertail. Pale buff bands across the flight feathers are obvious in flight. The face is pale, with a dark line through the eye, and a dark crown. Sexes differ slightly in all plumages, with small patches of black and white streaking on the centre of the uppermost breast on males, while the females exhibit a rufous and white streaking. Juveniles differ from adults mainly by the pattern of the under-body, and by their a pale bill and gape. Subspecies victoriae is distinguished from subspecies picumnus by colour differences on the face, body and tail markings. The two subspecies grade into each other through central NSW. Individuals are active, noisy and conspicuous, and give a loud ‘pink’ call, often repeated in contact, and sometimes given in a series of 5 – 10 descending notes. Breeds from July to Feb across its range.

The Brown Treecreeper is endemic to eastern Australia and occurs in eucalypt forests and woodlands of inland plains and slopes of the Great Dividing Range. It is less commonly found on coastal plains and ranges.

The eastern subspecies lives in eastern NSW in eucalypt woodlands through central NSW and in coastal areas with drier open woodlands such as the Snowy River Valley, Cumberland Plains, Hunter Valley and parts of the Richmond and Clarence Valleys.

The population density of this subspecies has been greatly reduced over much of its range, with major declines recorded in central NSW and the northern and southern tablelands. Declines have occurred in remnant vegetation fragments smaller than 300 hectares, that have been isolated or fragmented for more than 50 years.