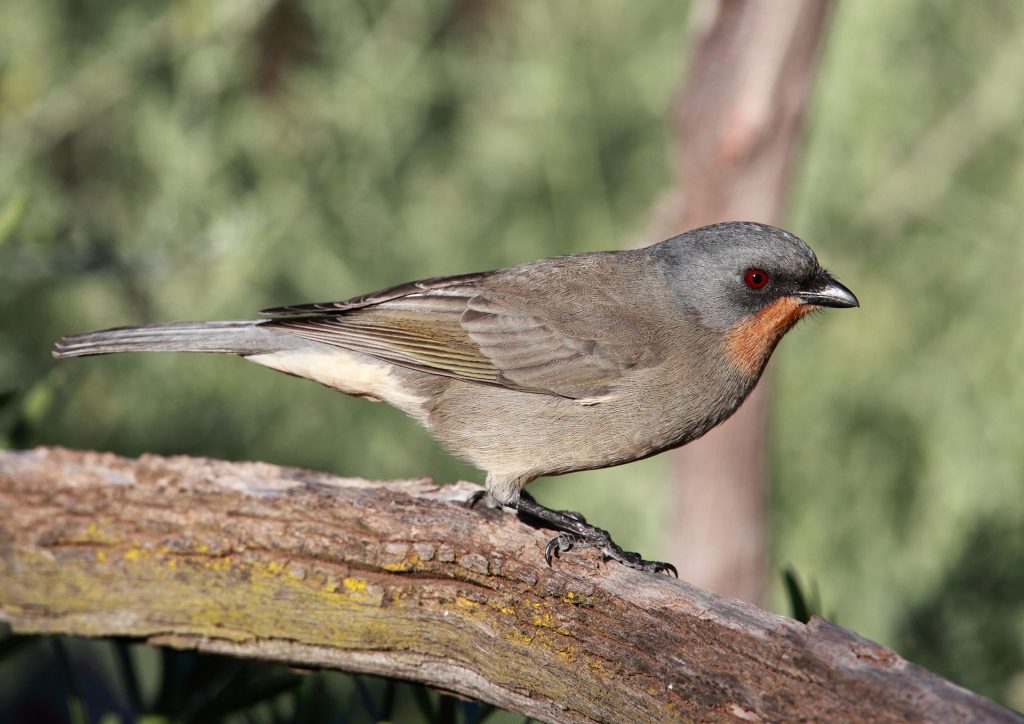 The Gilbert’s Whistler is a stocky whistler (17 to 20 centimetres), possessing a short but robust bill. The male is a brownish-grey, with a black patch between the red eyes and bill (the lores), and a distinctive orange-rufous chin and throat. The female is more uniformly brownish-grey, lacking the males lore and throat pattern and has a pale eye-ring. This species, particularly the female, can be difficult to distinguish from other whistlers. Young birds of this species usually have distinctive rufous feathers in the wing. The Gilbert’s Whistler usually occur singly or in pairs and can be unobtrusive and hard to see. Like other whistlers, this species is a wonderful bush songster and is often first detected by its call. Its powerful song is complex and far-carrying (up to 900 metres) and often consists of a series of ‘chop’ and ‘er-whit’ calls.

The Gilbert’s Whistler is sparsely distributed over much of the arid and semi-arid zone of inland southern Australia, from the western slopes of NSW to the Western Australian wheatbelt. The species was probably once distributed almost continuously across the woodlands and mallee of southern NSW, but this range has been greatly reduced, chiefly by clearance of habitat. The eastern population extends from the central NSW mallee (Yathong, Nombinnie and Round Hill NRs), south and east through the Cocoparra Range to Pomingalama Reserve (near Wagga Wagga) then north through the South West Slopes east as far as Cowra and Burrendong Dam, to the Goonoo reserves (with scattered records as far north as Pilliga). The north western limits of this population are poorly known, with records from as far west as Cobar and recent records from Quanda NR, though records further west may be due to confusion with the Golden Whistler. In a number of reserves in this area there have been no recent records (last records from Pulletop NR 1982, Pomingalama Reserve 1995 and Ingalba NR 1999) and this species may be locally extinct. Occasional records are also made of this species in the Capertee Valley. The species is also recorded in River Red Gum forests along the Murray River valley between Mathoura and Wentworth, with the eastern populations (between Mathoura and Barham) apparently isolated from other NSW populations. West of Swan Hill, this population may interact with populations found to the north of the Murray River west of Balranald and as far north as the Scotia country (Tarawi NR and Scotia Sanctuary).