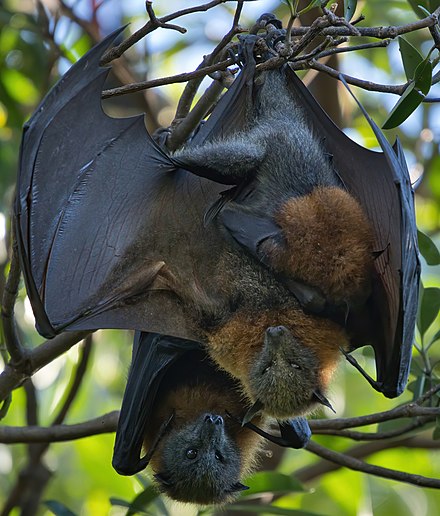 The grey-headed flying fox is the largest bat in Australia. The overall colour of the pelage is a dark-grey body with a light-grey head, separated by a reddish-brown collar. The fur on the body is long and streaked with grey, the broad and well defined collar completely encircles the neck with hair that is golden orange in tone. A unique characteristic among bats of the genus Pteropus is fur on the legs that extends all the way to the ankle. Adults may have a wingspan reaching one metre in length and be up to one kilogram in weight. Weight generally varies between 600 and 1000 grams, with an average of 700 g.

Since it does not echolocate, it lacks the tragus or leaf ornamentation found in many species of Microchiroptera. It relies on smell and, predominately, sight to locate its food (nectar, pollen and native fruits) and thus has relatively large eyes for a bat.

The grey-headed flying fox is long-lived for a mammal of its size. Individuals reportedly survived in captivity for up to 23 years, and a maximum age of up to 15 years seems possible in the wild.

Grey-headed flying foxes live in a variety of habitats, including rainforests, woodlands, and swamps. These camps are variable in size and are seasonally relocated; the warmer parts of the year find them occupying cool and wet gullies in large groups. During the day, individuals reside in large roosts (colonies or ‘camps’) consisting of hundreds to tens of thousands of individuals. Colonies are formed in seemingly arbitrary locations. Roost vegetation includes rainforest patches, stands of melaleuca, mangroves, and riparian vegetation, but roosts also occupy highly modified vegetation in urban areas.