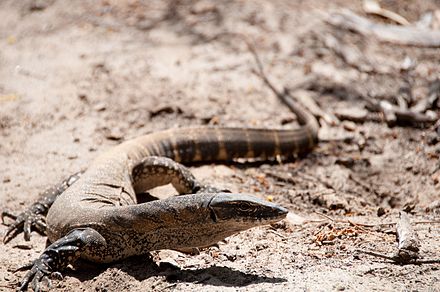 Rosenberg’s Goanna reaches up to 1.5 metres in length. It is dark grey above, finely spotted with yellow or white, and with paired, blackish cross-bands from the neck to the end of the tail. The pairs of narrow, regular bands around the entire length of the tail is a distinguishing feature, separating it from the more common Lace Monitor, which has very wide, light and dark bands towards the tip of the tail. Rosenberg’s Goanna also has distinct, finely barred “lips”, whereas the Lace Monitor has far broader bands around the snout. A pale-edged black stripe runs from the eyes, across the ears and onto the neck. Juveniles are brighter in colour, having an orange wash on the sides of the face and body.

Rosenberg’s Goanna occurs on the Sydney Sandstone in Wollemi National Park to the north-west of Sydney, in the Goulburn and ACT regions and near Cooma in the south. There are records from the South West Slopes near Khancoban and Tooma River. Also occurs in South Australia and Western Australia.