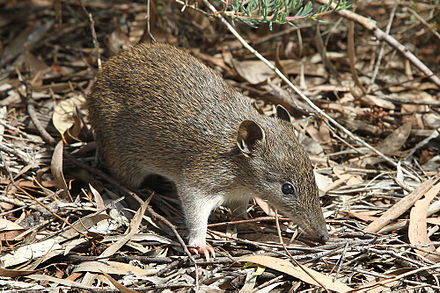 The southern brown bandicoot (Isoodon obesulus) is a short-nosed bandicoot, a type of marsupial, found mostly in southern Australia.  In Victoria, they are more common than elsewhere in Australia, being found along the whole length of the coast and at up to 1,000 m (3,300 ft) in the Grampian and Dandenong mountains.

Southern brown bandicoots are nocturnal and omnivorous, feeding on insects, spiders, worms, plant roots, ferns, and fungi. They spend very little time drinking, being able to obtain sufficient water from their diet alone.  Although their native predators include barn owls, tiger snakes, and quolls, the bandicoots do not avoid the odour of these animals, which may make them vulnerable to predation. They do, however, typically avoid one another, living solitary lives in non-overlapping home ranges that typically vary from 1 to 5 hectares (2.5 to 12.4 acres), depending on the local conditions. If males encounter one another, the more dominant individual leaps onto the back of the other, scratching with its claws. Because the skin of bandicoots is unusually thick, this results in hair loss, but little permanent injury to the defeated male.

They spend much of the night searching for food, which the detect primarily by scent, sniffing the ground before digging into with their claws. They pursue any prey that escapes, holding it down with their forepaws as they consume it. They spend the day sleeping in well-concealed nests of shredded vegetation.  Both sexes possess scent glands between the ears that are apparently used in intra-species communication and become enlarged during the breeding season.