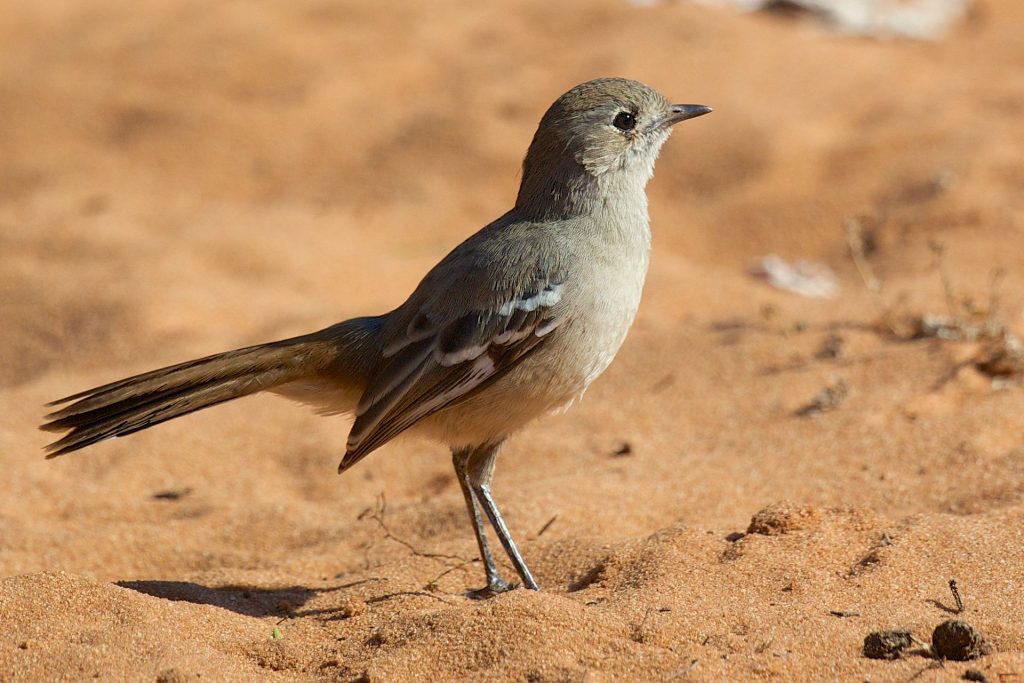 The Southern Scrub-robin is a medium-sized (19 – 22 centimetres) ground-dwelling thrush-like bird. The head and upperparts are dull grey-brown, and the throat and underparts pale brown with a paler belly. The base of the long tail, which is sometimes held cocked or irregularly flicked, is bright rufous becoming darker along its length and ending with a white tip. The wing coverts are white tipped forming a double bar on the wing. The head is distinctively marked with a pale rear eye-ring and a vertical black eye mark surround the large dark eye. The beak and long legs (reflecting the terrestrial lifestyle) are black. Sexes are alike although the female is distinctly smaller. The only other species that it possibly could be confused with, the Chestnut Quail-thrush, is larger, has a different posture (mainly due to much shorter legs) and very different plumage and head patterns. Usually encountered singly or in pairs, it is often very shy and difficult to observe. However, it can often be detected by its loud calls, and during the breeding season it regularly calls from an elevated perch.

This species is restricted to mallees and shrublands across southern Australia and in NSW is confined to two main areas. The first is in central NSW and is centred on Round Hill and Nombinnie Nature Reserves, though suitable habitat probably exists on adjoining leasehold lands. This population once extended south and east to near Griffith and West Wyalong, but clearing appears to have led to its local extinction in most of this region. The final record from The Charcoal Tank NR was in 1993, while in Pulletop NR it has not been observed since 1982. The other population occurs in the far south west of NSW, mainly within the Scotia mallee centred on Tarawi NR and Scotia Sanctuary. Records east of the Darling River are more scattered, with recent confirmation in Mallee Cliffs NP, and a new population recently detected on leasehold land to the north of Euston. Other populations may still occur in other areas of mallee, particularly those with a well developed shrub layer in the south west corner of the state.