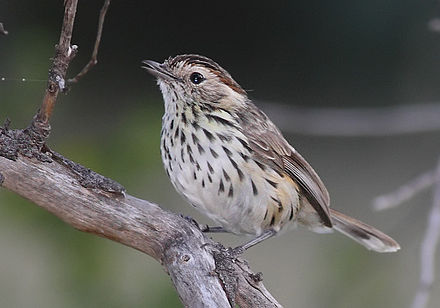 The Speckled Warbler is a small well-camouflaged very heavily streaked ground-dwelling bird related to the scrubwrens, reaching a length of 13cm. The back, wings and tail are grey-brown, with soft dark streaks. The black crown is distinctively streaked with buff. The underparts are pale and particularly heavily streaked. The face is off-white with streaking on the ear coverts. The male has a black upper margin to the brow, while the female has a rufous upper edge to the brow. The dark tail is held horizontally, although in flight the spread tail shows a wide black band above white tips of the outer tail feathers. The call is an undulating rich, trilled, warbling mix of clear sharp whistles and mellow notes. The alarm call is a harsh churring chatter.

The Speckled Warbler has a patchy distribution throughout south-eastern Queensland, the eastern half of NSW and into Victoria, as far west as the Grampians. The species is most frequently reported from the hills and tablelands of the Great Dividing Range, and rarely from the coast. There has been a decline in population density throughout its range, with the decline exceeding 40% where no vegetation remnants larger than 100ha survive.