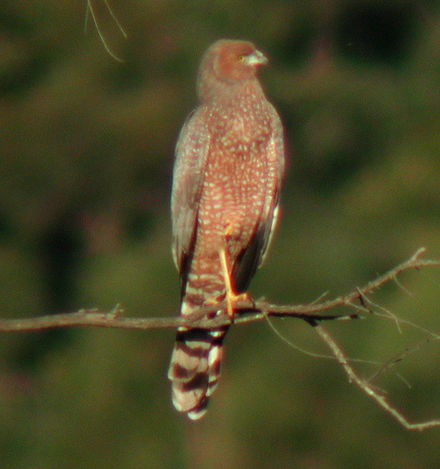 The Spotted Harrier is a medium-sized, slender bird of prey having an owl-like facial ruff that creates the appearance of a short, broad head, and long bare yellow legs. The upperparts are blue-grey with dark barring, and the wingtips are black. The face, innerwing patch, and underparts are chestnut. The long tail is boldly banded, with a wedge-shaped tip. Juveniles are mottled and streaked ginger and brown, with prominent ginger shoulders, fawn rump and banded tail.

The Spotted Harrier occurs throughout the Australian mainland, except in densly forested or wooded habitats of the coast, escarpment and ranges, and rarely in Tasmania. Individuals disperse widely in NSW and comprise a single population.