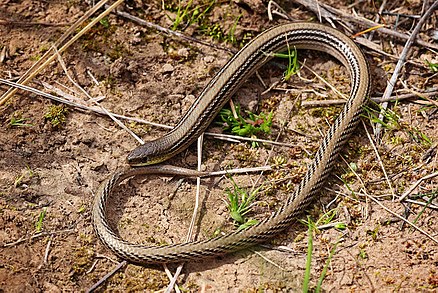 The Striped Legless Lizard differs most obviously from a snake in having external ear openings, small scaly flaps for hind limbs, a long tail and a broad, undivided tongue. It is pale grey-brown above, with a darker head, and almost white below. The most distinguishing characteristic is a pattern of light and dark parallel lines running along the length of the body, although these may be very pale or even absent in some individuals. This parallel stripe pattern breaks up into a diagonal pattern on the tail. They grow to about 30 cm in length, with up to three-quarters of this being the tail.

The Striped Legless Lizard occurs in the Southern Tablelands, the South West Slopes and possibly on the Riverina. Populations are known in the Goulburn, Yass, Queanbeyan, Cooma and Tumut areas. Also occurs in the ACT, Victoria and south-eastern South Australia.