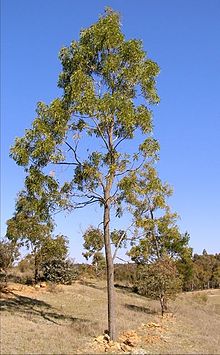 Acacia implexa is a widespread species in eastern Australia, extending from an outlier on the Atherton Tableland in north Queensland, south through southeastern Queensland and along the coast and tablelands of eastern New South Wales. It is widespread in Victoria and an outlier occurs on King Island, Tasmania. This species is a small to medium sized tree up to 15 m tall with a dbh up to 50 cm. It grows on a wide range of different sites and is commonly found on shallow, well-drained soils.

Acacia implexa is a fast growing, nitrogen fixing tree that can be grown on a range of recharge sites. Although best development will be on deeper soils, rocky, shallow soils could be targeted. From limited plantings to date it appears that this species exhibits considerable provenance variation, particularly for frost tolerance. Its wood has potential as craftwood and for specialty furniture timber, being similar in appearance to Blackwood, and its bark has a high tannin content. This species is considered to be slightly salt tolerant.